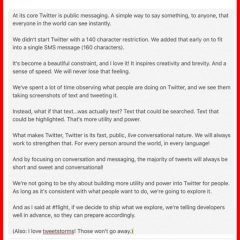 Last week Jack Dorsey, CEO of Twitter, sent out the following tweet as an image (which, currently, is the only way to send a long tweet). In essence, he announced that Twitter is working on a feature that will allow users to send tweets as long as 10,000 characters, rather than the current limit of 140 […]