Are you ready to create a bestselling book?

Do you want a book that everyone is talking about?

Do you want to create a bestselling brand that builds your book from a simple paperback to a multimedia empire?

You can do it. You just need a great title!

To the next national bestselling author! That’s you!

An effective book title alone can make the difference between a mediocre seller and a bestselling book.

The title of a book, like the headline of an advertisement or news story, often makes the difference between a reader passing the book by or picking it up and giving it more careful consideration.

More often than not, the reader gives less than a moment’s attention to any book title; if you don’t capture the reader’s imagination or curiosity or desire in that short moment, you will have lost the sale.

More important, however, is that many distributors, bookstore buyers, reviewers, and subsidiary rights buyers also judge a book by its title (and its cover). They know from experience that a good title sells more books. As Gloria Norris of the Book-of-the-Month Club once noted, “We can break out good writers—especially if their books have good titles.”

Does a title make a difference? Yes, it does!

You can test your titles. Back in the 1950s, the Little Blue Book series tested all their titles. Which of these titles do you think sold best?

Care of Skin and Health vs. Eating for Health

The Art of Kissing sold more than 60,000 copies in one year while The Art of Courtship sold 17,000 copies. That didn’t surprise me.

All four titles (with very little if any other selling copy or description) were exposed to the same number of readers the same number of times, so these sales reflect a really solid test of the titles — and how book buyers responded to them.

You need to make your title memorable. That’s what I look for when I critique book titles.

When John Gray followed up his bestselling Men Are from Mars, Women Are from Venus with What Your Mother Couldn’t Tell You and Your Father Didn’t Know, Borders returned 50% and Ingram 70%. Why? Because the second book didn’t have nearly as memorable a title.

As Susie Russenberger of Ingram Book wholesalers noted, “The previous book had a great title, but this one was really hard for people to say.” When Gray began doing more Mars and Venus books, his books again leapt to the top of the bestseller lists.

Here are a few of the book titles resulting from my book title critiques:

The Million Dollar Seed: How to Write Your Book and Build an Empire

The Five-Minute Secret: How to Connect with Anyone, Anywhere, at Any Time!

A Brave True Story: A transformational story about healing family ties and relationships

Touch the Spirit: Connecting to the Inner World of Dementia

How to Talk to Your Husband about Money

My Sweet Bride: How Mature Men Can Rekindle Their Marriage with the tag line: Psst: Ladies, Get Your Man to Read This Book!

“As a publisher on a budget, I can confidently say that consulting with John on the cover of The Way of Leading People: Unlocking Your Integral Leadership Skills was the best money I spent promoting my book. John provided me with clear, concise feedback while making several valuable marketing suggestions.” — Tim Warneka, founder, Asogomi Publishing International

“John’s Book Cover Critique was the best investment I’ve made on my book.” — Sandra Lewis, publisher, My Health Record

Book Title Changes – The Impact of Changing the Title

One paperback publisher changed the title of a book from Five Days to Five Nights. The second title sold much, much better than the first.

When Garden Way changed the title of one of their books from The Squash Book to The Zucchini Cookbook, sales rocketed from a paltry 1,500 copies to over 300,000 copies.

They Don’t Build Statues to Businessmen to Valley of the Dolls—Which book sounds like a novel you could lose yourself in?

The Little Blue Book Company, as noted above, often tested the titles to their books. Here are the yearly sales resulting from some of those changes:

The Pineapple Diet Book to The Beverly Hills Diet Book—The second is much more glamorous and enticing. Pineapples pucker my mind.

The PRE-Reading Experience to Developing the Early Learner to The IQ Booster Kit—Note how the title becomes more specific while at the same time offering greater benefits. Which would you buy if you were a parent? Which do you think sold best?

Tomorrow Is Another Day and Tote the Weary Load to Gone with the Wind—and the heroine’s name was changed from Pansy to Scarlett O’Hara. Which title do you think has sold millions of copies and become a major motion picture? Would the two original titles have done as well?

A Grammatical Institute for the English Language (with an 18-word subtitle) to The American Spelling Book—Which title do you think sold best for Noah Webster’s first spelling book, published in 1783?

A Story That No One Can Beat to And to Think I Saw It on Mulberry Street—Dr. Seuss’s first book was rejected by 27 publishers under that first title. When Ted Henle of Vanguard Press bought the manuscript, the first order he gave Seuss was to come up with a snappier title. He did.

It Shouldn’t Happen to a Vet to All Things Bright and Beautiful—Not only was the second title more interesting, but it allowed James Herriot to come up with wonderful titles for the rest of the books in the series.

Your Guide to Coping with Pain to Conquering Back Pain—The Canadian title was changed when Prentice-Hall came out with a U.S. edition so that the title would better reflect the book’s contents. And better reflect the American way of viewing problems.

“I love your book (1001 Ways) by the way (with the innovative marketing ideas). I am trying to get my money saved because many have said a consultation with you is worth every penny and more.” — Debra Cohen, author, Gems of Wisdom: Quotes to Ponder

“You have an uncanny ability to find out the needs of countless number of authors you have advised and counseled so that individually we feel you’ve tuned into us. Yet your ideas have a universal appeal. One of my areas of interest is in creativity. You certainly have a most unusual creative spirit. You come up with ideas so spontaneously and offer them so easily and warmly it’s like you’ve been thinking of the subject forever. And as I mentioned to you, I know how much you enjoy giving to others. Your laughter and good humor punctuate what you give.” — Marv

“My meeting with John Kremer was one of the most important factors contributing to the success of my self-published international bestseller, Seeds of Deception. At his advice, I found the ideal distributor, started my institute, made important changes in the book, and confidently set up the marketing plan that has sustained me for years. I recommend to everyone who asks me about writing or publishing a book to speak with John.” — Jeffrey Smith, author of Seeds of Deception: Exposing Industry and Government Lies about the Safety of the Genetically Engineered Foods You’re Eating

Holding Out for a Great Title – Swim with the Sharks

When Harvey Mackay was writing Swim with the Sharks Without Being Eaten Alive, he kept trying out different titles. He rejected Prepare to Win as too mundane and 88 Lessons for ’88 as too dated. Finally, he came up with a line from the book, How to Swim with the Sharks Without Being Eaten, which he liked because of its powerful symbolism which combined a bit of raunchiness with a sense of curiosity.

His publishers at Morrow, however, hated it. They said it was too long and too vague. But Mackay was convinced it was the right title, so he hired Janz/Abrahamson, a Minneapolis company experienced in naming consumer products such as hot dogs, beer, and jelly. They put together a focus group which checked out over 800 titles. Mackay’s title, minus the How to, remained their top choice. When Mackay showed the results to the people at Morrow, they capitulated. As Morrow’s senior editor, Adrian Zackheim, noted in an article in Inc. magazine, “If an author feels such a moral certainty about a title, you’ve got to say yes.”

If you are having trouble coming up with a good title, order my Book Title Critique service. I can help you create a book title that gets attention AND helps you sell more books. 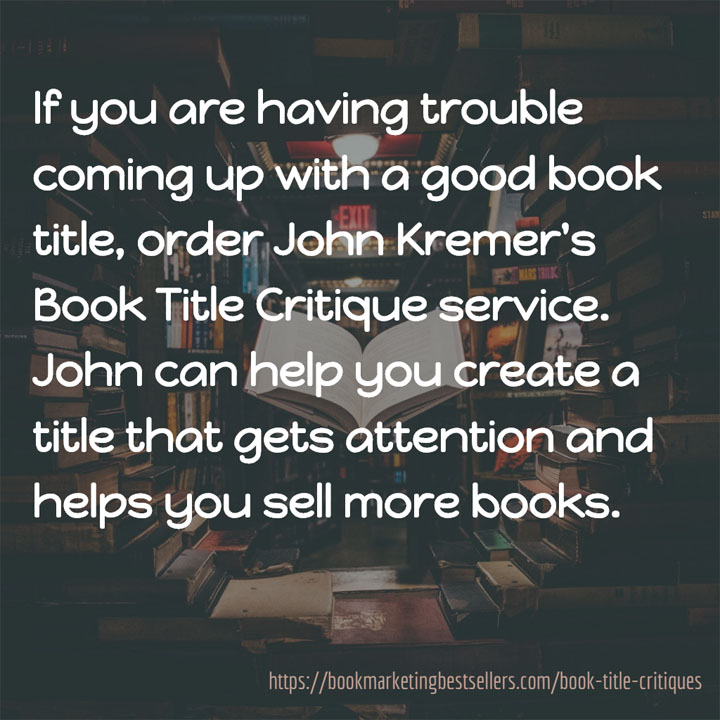 John Kremer can help you create a book title that gets attention AND helps you sell more books. #authors 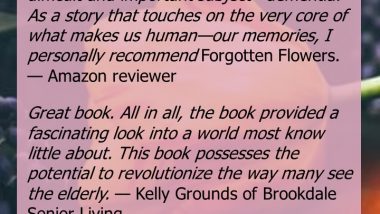 Great Books Are Found Everywhere: The More You Do The Better You Feel