No matter what kind of book you have written or product you have created or service you offer, Pinterest can send you a ton of avid customers to your website, sales page, email squeeze page, Amazon book page, Clickbank product link, etc. 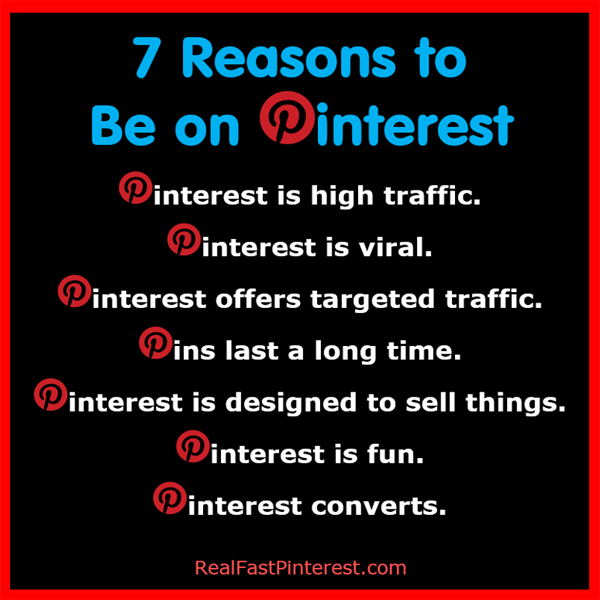 How can Pinterest send you so much traffic? Here are thirteen reasons why it can send you lots of traffic (and why you should be active on Pinterest):

Pinterest serves over 1.5 trillion pins and repins every year. 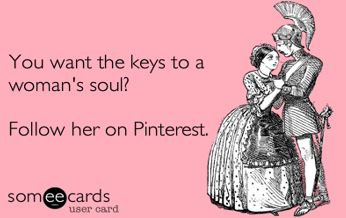 As the graphic says: If you want the keys to a woman’s soul, follower her on Pinterest. It’s true for men or women because people create boards that actually showcase their most avid interests and desires.

When a user pins an image to Pinterest, the image is always pinned to a specific board. Other people follow a user or one of the user’s boards because they have an avid interest in the same subject. Those followers often repin images from those they follow — and they pin those images to very similar boards. That’s why the traffic from Pinterest is so targeted: Because it comes from specific boards.

Why the traffic from Pinterest is so targeted: Because it comes from specific boards.

I have pins that still send 50 to 100 people to my websites every day — months or even years after I originally pinned them.

Pin an image once and it can send traffic to your website (or any page on the web you choose) for months, even years later. Day after day, month after month, year after year.

In my experience, the half-life of a pin is at least one month with many pins still driving significant traffic to my websites three-and-a-half years after being pinned.

Pin an image once and it can send traffic to your website for months, even years.

5. Pinterest is designed to sell things. Pinterest, by design, is focused on helping people to share their wish lists, dreams, passions, bucket lists, and more. Pinterest users actively pin the things they long for, things they love, things that excite them, things (and services) they want to buy.

In fact, pins with prices get 36% more likes than pins without a price (Pinterest). What does this imply? Simple: Pinterest users are actively creating shopping lists as they repin images they love.

The average order value of sales coming from Pinterest is $50 — higher than any other major social platform (Shopify, 2014).

30% of Pinterest users have bought something online after browsing pins (Business Insider).

Orders from Pinterest on mobile devices has increased by 140% in the last two years (Shopify, March 2015).

Because people like using Pinterest, they come back often to share new images and things that they like. Repinning is one of the funnest ways to showcase what you love. The more people repin your images, the more likely they are to click through to your website and discover all the things you have to offer them.

Repinning images on Pinterest is one of the funnest ways to showcase what you love.

2 million people save product pins to one of their boards every day! (Shopify, March 2015).

2 million people save product pins to one of their boards every day! #Pinterest

9. Pinterest converts. I have hundreds of pins that have gotten 100 to many thousands of repins (all the way up to 1.8 million repins). And those repins convert at an astounding rate. Many of my pinned images have clickthrough rates ranging from 2% all the way up to 25%.

Think of that: Up to 1 out of 4 people who repin an image click through to the underlying web page featured with that pinned image. You don’t begin to see those kinds of clickthrough rates on other social networks: not on YouTube, not on Facebook, not on Twitter, not on Instagram. And you certainly don’t see those kinds of clickthrough rates via email or mobile messaging.

10. Pinterest is international. Nearly 40% of Pinterest’s total user base comes from China, India, Indonesia, the Philippines, and Europe. In India, Korea, and Japan, the user base is roughly 50-50 men and women (Mashable, April 2015).

11. Pinterest is not time-sensitive. It doesn’t matter what time of day you post your pins. Why? Because it’s not the direct repins that matter so much. It’s the repins of the repins that will drive your traffic and sales.

Besides, the way your pins are displayed on Pinterest timelines allow most people to discover your pin no matter what time of day you originally pinned the image.

Keep the images you pin simple and easy to create. #Pinterest #pinning

13. Pinterest is mobile. 90% of Pinterest traffic comes from smartphones and tablets. Twitter is 86% mobile while Facebook is 68% mobile (ComScore). That means your pins could be discovered at any time as mobile users check in no matter where they are.

Be sure your pins lead to web pages that are mobile friendly!

52% of Pinterest users say that it helps them find items they want to buy (Business Insider).

Book Rights Question: How Do I Sell Mass-Market Paperback Rights to a Thriller?