Intelligence test: If you think you are briliant, In 10 seconds. Write any word that start with ‘A’ and end with ‘E’.

When I first came across this so-called intelligence test, I first noticed all the errors in the test itself. So my first thought was to correct the errors and then share the corrected version of this test. 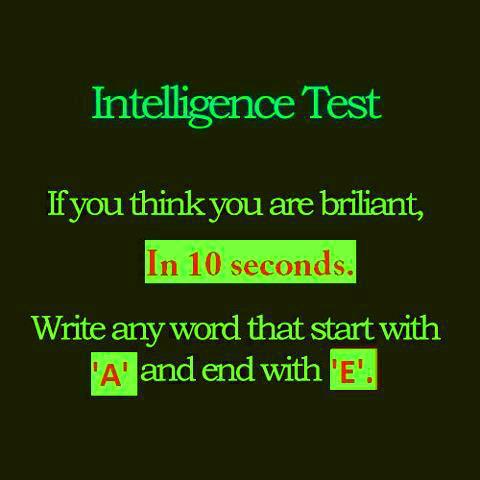 Surprisingly, of the 657 responses to this intelligence test, at least 95% focused on answering the challenge in the image with such words as ape, are, age, adobe, alive, Alice, ace, apple, and other relatively short answers. Some answered with clear challenges to the test itself with words like asinine, arse, and asshole.

And one person answered the test literally: any word that start with ‘A’ and end with ‘E’.

Only a few Facebook followers actually read my introductory statement and noted the errors in the above intelligence test. Without further ado, here are 13 possible spelling and grammatical errors:

1. Briliant should be spelled brilliant.

2. In should not be capitalized.

3. Write should not be capitalized.

4. Start should be starts.

9. 10 should be spelled out as ten. Some writers believe this is more a choice than a law of style. In British style, 10 is perfectly acceptable.

13. Should there be a that here: If you think that you are brilliant. I think this is a stylistic choice. It seems to me in modern English, the word that is often optional in such a sentence structure.

So the final instructions could read as follows: Intelligence test: If you think you are brilliant, in ten seconds, write any word that starts with ‘A’ and ends with ‘E’.

Intelligence test: If you think you are brilliant, in ten seconds, write any word that starts with ‘A’ and ends with ‘E’.

Oh, and for your next challenge: Can any of you name an a-to-e word longer than the 13 characters of antihistamine?

Can you name an a-to-e word longer than the 13 characters of antihistamine?

Arthur Plotnik on Writing and Editing