My question has to do with pen names, and when they’re appropriate to use.

If I do use a pen name and then attempt to arrange marketing interviews, who are they interviewing me or the pen name?

You must know that I can’t hold back writing this book. I can’t sleep at night and I have to get this book out and into the world. Please help!

You can use pen names any time you want to hide your identity. 18 reasons to use a pen name.

When to Use a Pen Name

Well, in the interest of marital peace, I guess I’ll have to answer your question. I presume you are keeping your wife up at night as well since you can’t sleep.

You can use a pen name (aka nom de plume or pseudonym) any time you want to hide your identity, create a new persona, or simply to celebrate a new way of looking at things.

Keep two literary lives separate. That’s a very good reason to use a pen name for one of those identities.

Mathematician Charles Dodgson wrote a number of fantasies under the pen name of Lewis Carroll (Alice’s Adventures in Wonderland) but wrote his more serious tomes under his real name.

You want to write a different kind of work.

Later in her career Pearl Buck wrote five novels under the name of James Sedges.

You produce so much that you have to write under two names to keep your publisher happy so you don’t over-saturate the market under one name. Some prolific authors have to use two names because publishers are afraid that the reading public won’t buy more than one novel per year from an author.

When he first started out, science fiction author Robert Heinlein wrote under a number of pen names so he could have more than one story appear in a single issue of a magazine.

Use a pen name: You produce so much that you write under two names to keep your publisher happy.

You need to keep your identity hidden because someone is out to kill you, imprison you, or do other dastardly deeds upon your person.

Dissident Muslims often use the pen name of Ibn Warraq to hide their identities.

You just like the sound of a new pen name.

Samuel Langhorne Clemens wrote many of his works under the pen name of Mark Twain, but he also used the pen name Sieur Louis de Conte for other works.

You want to hide your sexual identity. In the early 1800s, it was considered unseemly for a woman to write books.

The Brontë sisters wrote under male names ending with Bell.

Even in this century, Karen Blixen originally published Out of Africa under the pen name of Isak Dinesen.

A number of women science fiction authors originally wrote under male names because the genre was so male-dominated in its early years. Alice Bradley Sheldon wrote as James Tiptree Jr. (she was also a bisexual career intelligence officer, so she had other reasons to hide her identity).

On the other side, Tom E. Huff wrote romance novels under the pen names of Jennifer Wilde and Edwinna Marlowe

Harold Lowry wrote romances under the name of Leigh Greenwood.

Vince Brach under the name of Fran Vincent.

Mike Hinkemeyer under the name of Vanessa Royall.

You’re forbidden to write books under the terms of your work contract. If you work for a major corporation, some level of government, a non-profit organization, or media, your employment contract may prohibit you publishing books under your real name.

Brian O’Nolan used several pen names (Flann O’Brien and Miles na gCopaleen) to hide his identity because Irish civil servants at the time were not permitted to publish works under their own names.

You use the name of a character as your pen name.

Daniel Handler wrote the Lemony Snicket young adult novels as purported memoirs of an acquaintance of the main characters.

Book series are often written under one name even though multiple authors might have contributed books to the series.

The Bobbsey Twins series was credited to Laura Lee Hope, the Nancy Drew mystery series to Carolyn Keene, and The Hardy Boys mysteries to Franklin W. Dixon although all three series had multiple authors.

Frederic Dannay and Manfred Lee wrote mysteries under the pen name of Ellery Queen (which became a brand name under which they also published a magazine).

James Madison, John Jay, and Alexander Hamilton wrote The Federalist Papers under the name of Publius.

You take a pen name to fit your genre better.

You want to state stronger opinions than your contemporaries might tolerate.

Diplomat, businessman, and patriot Benjamin Franklin wrote Poor Richards Almanac under the pseudonym of Richard Saunders so he could write more caustically.

You’re an insider but are not ready to reveal your identity.

Joe Klein wrote Primary Colors, a novel about the Clinton presidency under the name of Anonymous.

Your family doesn’t approve of your writing.

Eric Blair’s family was opposed to him writing because it was beneath his family’s status so he began writing his novels under the pseudonym of George Orwell.

Louisa May Alcott’s family would never have approved of her stories of mayhem, romance, and death so she used pseudonyms like Flora Fairfield and A. M. Barnard.

Your name is hard to remember.

Write and publish without hype or expectation. If you are a famous author but want to publish a new book (perhaps in a new genre), you can use a pen name.

Improve SEO with an unusual name. This suggestion came from Tony Oliver (aka John Doe) via a comment on Facebook: To improve SEO when your name is too common to stand out on a Google search.

Improve your credibility. This suggestion came from Alan Stransman via another comment on Facebook. Keep those comments and letters coming! Also checks! Or cash!

You have left out, “When you want people to think you are actually someone who can write…” which is why I write and publish under the name John Kremer…. — Alan Stransman

Well, as you can see, many successful authors have published under pen names.

Now, as to your other question…

When you are being interviewed, you will be interviewed under your pen name at least until you are ready to admit your true identity.

For the legal side of this question, please see attorney Ivan Hoffman’s excellent discussion of the legal and copyright ramifications of pen names: http://www.ivanhoffman.com/pennames.html.

See also How to Use a Pen Name.

16 reasons to use a pen name: hide identity, two genres, experimental, and more. 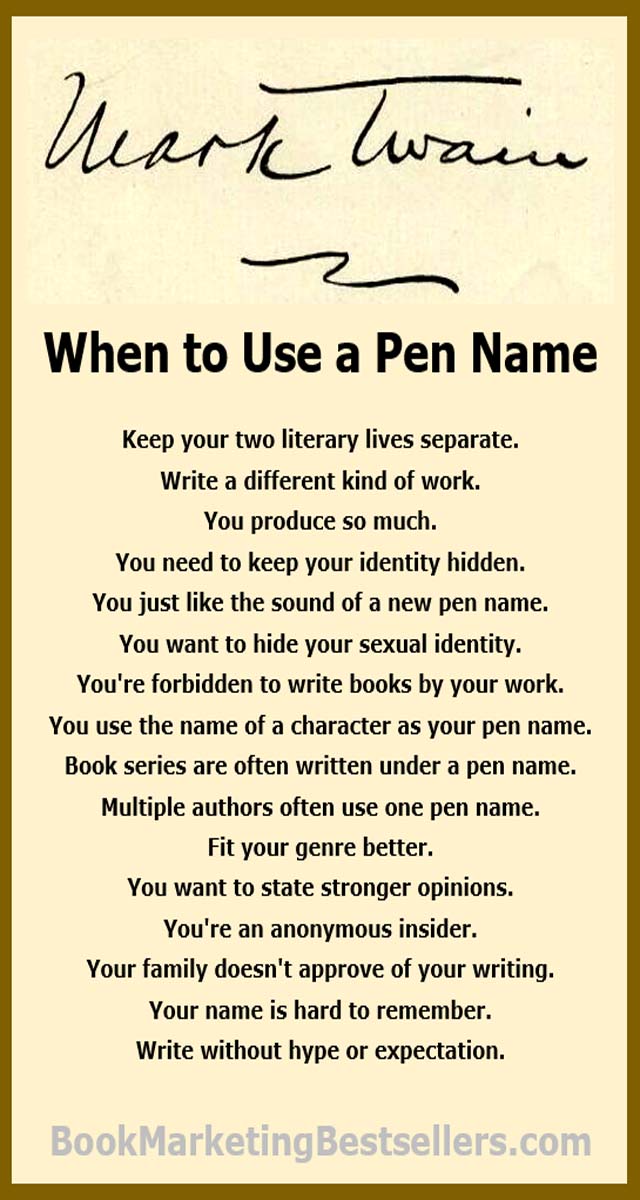 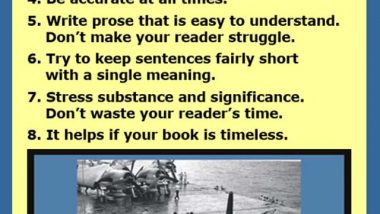