Here’s a little humor break: David Letterman quotes for you to share.

A little humor break: Here are just a few of the pearls of wisdom that David Letterman shared over the years of hosting Late Night:

USA Today has come out with a new survey: Apparently three out of every four people make up 75 percent of the population.

Everyone has a purpose in life. Perhaps yours is watching television.

Fall is my favorite season in Los Angeles, watching the birds change color and fall from the trees.

Fine art and pizza delivery, what we do falls neatly in between!

New York now leads the world’s great cities in the number of people around whom you shouldn’t make a sudden move.

I can’t sing, dance or act. What else would I be but a talk show host?

I’m just trying to make a smudge on the collective unconscious.

I can’t sing, dance or act. What else would I be but a talk show host? — David Letterman

Sometimes when you look in his eyes you get the feeling that someone else is driving.

People say New Yorkers can’t get along. Not true. I saw two New Yorkers, complete strangers, sharing a cab. One guy took the tires and the radio; the other guy took the engine.

If it wasn’t for the coffee, I’d have no identifiable personality whatsover.

If it wasn’t for the coffee, I’d have no identifiable personality whatsover. — David Letterman

There’s only one requirement of any of us, and that is to be courageous. Because courage, as you might know, defines all other human behavior. And, I believe—because I’ve done a little of this myself—pretending to be courageous is just as good as the real thing.

Gays are now allowed to serve openly in the military. So maybe our next war could be a musical.

The worst tempered people I have ever met were those who knew that they were wrong.

Maybe our next war could be a musical. — David Letterman

Don’t forget it’s daylight savings time. You spring forward, then you fall back. It’s like Robert Downey Jr. getting out of bed.

There’s no off position on the genius switch.

I have found that the only thing that does bring you happiness is doing something good for somebody who is incapable of doing it for themselves.

There’s no off position on the genius switch. — David Letterman

Wherever we’ve traveled in this great land of ours, we’ve found that people everywhere are about 90% water.

If what you’ve done is stupid, but it works, then it really isn’t all that stupid.

America is the only country where a significant proportion of the population believes that professional wrestling is real but the moon landing was faked.

If what you’ve done is stupid, but it works, then it really isn’t all that stupid. David Letterman

Just make sure if you fail, you did what you wanted to do.

I haven’t reached nirvana yet, but I’ve been to Detroit.

Sometimes something worth doing is worth overdoing.

Just make sure if you fail, you did what you wanted to do. — David Letterman 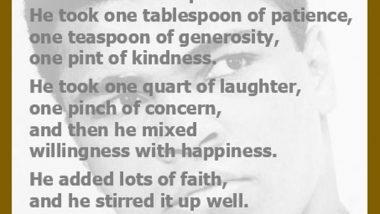