Here are 10 quick marketing tips for using Twitter to sell more books. These tips are derived from various articles I’ve read online and in magazines:

Note: Clicks are more valuable than retweets, but more retweets could get you more clicks.

2. Use the Right Words — According to Dan Zarrella, these 20 words and phrases will get you the most retweets: 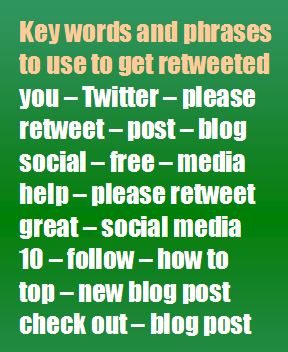 Notice in the above list: Please retweet, help, Twitter, and blog posts — and the key direct marketing words that work: you, free, how to, top, and check out.

4. Twitter for the Holidays — 57% of holiday shoppers use Twitter to determine what stores to visit. Be sure to send them to the stores that stock YOUR book!

5. Twitter and TV — 40% of tweets mentioned TV shows (at least in one study of users in the U.K.). In addition, according to Nielsen, 32 million Americans tweeted about TV in 2012. How does this impact you? Find ways to tweet about TV shows related to your book, your topic, or your style.

6. TV Trends — Twitter has been testing a variety of new features including a TV trending box that will appear in all users’ timelines. There may also be a stream that features only TV-related tweets. Again, this means that you should prepare to tweet more often about TV shows, especially those related to your book or topic.

7. Get More Leads — Companies on Twitter get 2 times the amount of leads per month as those not on Twitter. There’s no reason this stat shouldn’t also apply to book authors.

8. Go Japanese — Of the Twitter accounts responsible for the most all-time tweets, six of the top seven are Japanese, including all of the top five, according to Topsy. The top Twitter countries are the United States, Brazil, Japan, and Indonesia. What does this mean for you? Don’t ignore people overseas. Not only can they be potential readers for your books and especially your ebooks, but they can also be more responsive. Make friends everywhere!

9. Search Twitter — More searches are made on Twitter each month (24 billion) than on Bing and Yahoo combined. If you want to be found, use keyword hashtags whenever you tweet (or at least 40 to 50% of the time).

10. Use Hashtags — Tweets that include hashtags receive two times more engagement than tweets without hashtags. Use hashtags.

Retargeting: What It Is, Why You Should Use It

Pablo Picasso: On the Meaning of Life

A Sofa, a Book, and a Cup of Coffee