Video will only be getting hotter this year, especially on mobile. And, if your website isn’t mobile friendly, you will lose visitors and sales. And, finally, if you aren’t using other mobile tools (apps, push notifications, etc.), you will be missing a lot of new opportunities. Yup, it’s the year of mobile marketing!

Shop.com’s mobile sales doubled after they converted their website to a mobile responsive design (Shop.com).

Key stat: 52% of the time spent digitally by U.S. consumers happens within a mobile app (ComScore).

52% of the time spent digitally by U.S. consumers happens within a mobile app. #mobile #apps

If your website isn’t mobile friendly, you will lose visitors and sales in 2015 and beyond. #mobile

Yet, in mobile marketing, the key tech isn’t apps.

21% of people who download an app never look at it more than once!

Smartphone owners use an average of 24 apps every month, but they still spend 80% of their time on five apps (Facebook, YouTube, Maps, Pandora, and Gmail) [Forrester Research].

Most smartphone owners download fewer than 10 apps every year (ComScore).

There are over 1.4 million apps in the Apple Store. The competition is overwhelming.

80% of the apps in the App Store are zombies, meaning they can’t readily be found (Adjust).

BUT mobile apps from key online retailers will result in almost $60 billion in sales in 2015 (Internet Retailer 2016 Mobile 500).

21% of people who download a mobile app never look at it more than once! #mobileapps

More than one billion new smartphone users will come online in the next few years. That means the vast majority of people in the world will access the Internet via smartphones. Not computers. Not tablets. But smartphones.

There are currently 2 billion smartphone users worldwide. And by the end of this year there will be more than 7 billion mobile devices in use. By 2020, smart mobile devices are expected to surpass 26 billion!

More people in the world have smartphones than have computers. Worldwide, mobile sales are growing 6.4 times faster than U.S. mobile sales.

The average smartphone user checks her smartphone 150 times per day. Women check their phones more often than men do (Experien).

5.2 billion people in the world use a mobile device (mobile phones, smartphones, tablets). That’s 73% of the world’s population and almost as many people as have access to TVs (Kleiner Perkins Caufield & Byers). 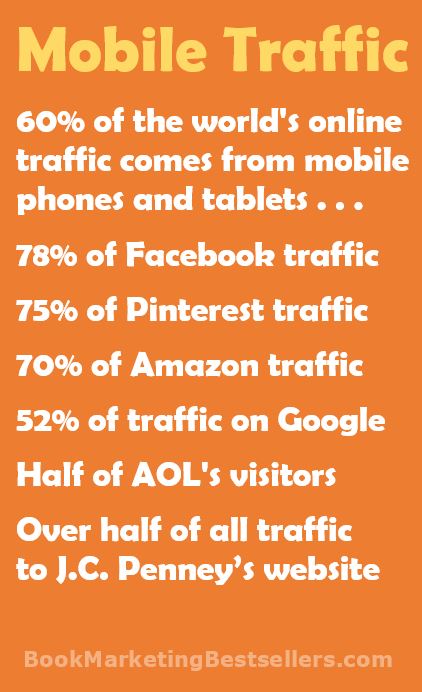 78% of Facebook traffic currently comes from mobile devices. 100 million U.S. consumers look at Facebook every day via a mobile device. Facebook will sell 33% of all mobile ads in the U.S. in 2015. 73% of Facebook’s ad revenue is generated via mobile.

70% of traffic to Amazon came via mobile devices in the last six months.

52% of traffic on Google is already from mobile devices.

75% of all daily traffic to Pinterest comes from native mobile applications.

Half of AOL’s monthly visitors come from mobile devices. And more than 50% of its ad revenue comes from mobile.

Over half of all traffic to J.C. Penney’s site (JCP.com) comes from mobile devices.

Forbes.com has 18 million smartphone only visitors. 2/3 of those visitors are Millennials.

62% of time spent on online retail in April 2014 happened via mobile devices (ComScore).

29% of U.S. consumer online purchases in 2014 were made by smartphones and tablets (Forrester Research).

43% of Etsy sales were mobile generated in the second quarter of fiscal 2015 (Etsy).

Ecommerce accounted for $25.8% of Neiman Marcus’s revenue (over $1 billion in sales) for the first three quarters of fiscal 2015 (Neiman Marcus).

95% of smartphone users have already searched for local information via their phones.

70% of mobile searches lead to action within an hour.

70% of mobile searches lead to action within an hour. #mobile #search

80% of consumers use their smart phones to shop.

U.S. consumers are more likely to browse via their smartphones but buy via their tablets.

89% of Twitter’s ad revenue is generated by mobile phones.

Starting on April 21st of this year, Google is changing its search algorithm to take into account how mobile-friendly a website is. Websites that are not mobile-friendly will not rank as well in search results. This Google change has come to be known as Mobilegeddon, aka Mopocalypse.

In summer 2015, Google tested a buy button in mobile search ads that took people to a mobile landing page where they can buy the product or service advertised. It is currently an added advertising option for search advertisers.

Over six billion text messages are sent in the U.S. every month.

More than 80% of American adults text.

90% of text messages are read in less than three minutes.

Text messages get a 45% response rate while email gets less than 6%.

Text messages reach an international audience of people who cannot afford computers but have and use mobile phones every day.

As of April 21, websites that are not mobile-friendly will drop in Google search results. #SEO

Yahoo has more than 500 people devoted to optimizing for mobile and creating mobile apps. In 2014, Yahoo reported $1.2 billion in mobile revenue.

Mobile commerce is expected to reach $120 billion worldwide by the end of 2015! #mobile

The Apple Watch could change mobile activity significantly. Will users shop via the watch? Note: Apple users are strong shoppers, so the expectation is that they will shop via the Apple Watch. Over 2.79 million Apple watches were sold in the first three months.

Will you and your web presence be ready?

70% of traffic to Amazon came via mobile devices in the last six months. #Amazon #mobile

Over half of all traffic to J.C. Penney’s site (JCP.com) comes from mobile devices. #JCP 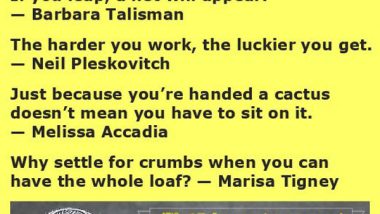